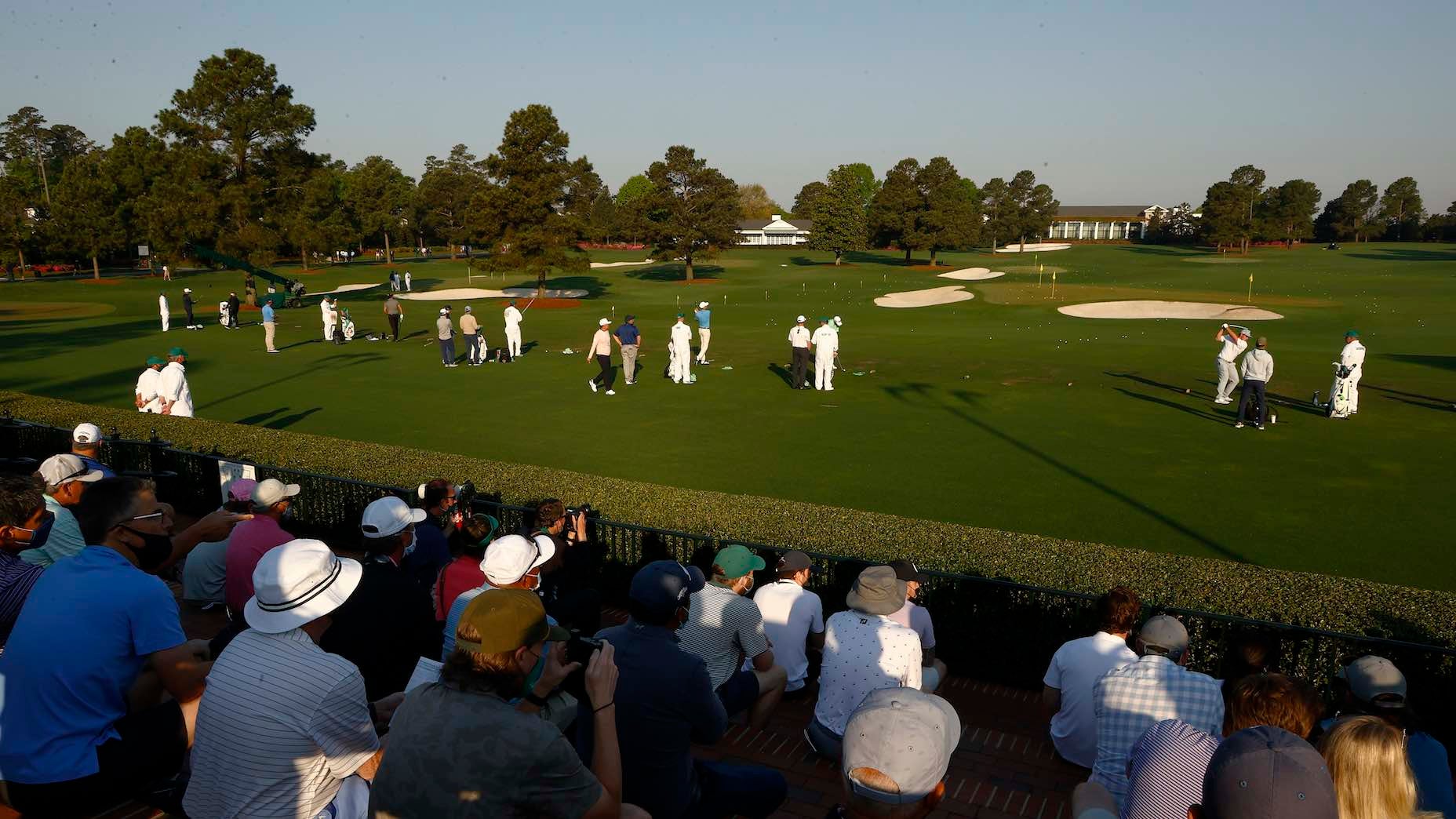 He was referring to Ancer’s brush with the sand during Thursday’s opening round, a retroactive two-stroke penalty that turned his opening 73 into an opening 75 and must have soured his dinner.

Ancer appreciated the acknowledgement. “Ah, that’s okay,” he said, shrugging as if to say, “What can you do?” He continued to putt. It was a new day.

On Wednesdays at major championships, the board is set. On Thursdays, the pieces begin to move. But Fridays are when the tournament’s identity really takes shape. Fridays are when contenders emerge and when favorites go home. Some storylines begin and others end. The reason I like the practice area on Friday is because everybody’s there, mixed in, regardless of what they shot on Thursday or where on the leaderboard they’ll enter the weekend.

The practice facilities at the Masters are relatively simple but impeccably manicured and thoughtfully conceived. There’s a putting green and a couple chipping greens adjacent to the range itself. Behind the range is an amphitheater of brick and turf where interested spectators can take in the action. By Friday, everybody — even the Masters rookies — knows exactly where to go.

As Ancer began another round of four-footers, defending champion Dustin Johnson sauntered onto the green. (Nobody saunters like Dustin Johnson.) He set up an alignment aid on the ground and commenced putting. Before each stroke he would use his left arm to position his right arm in a very specific position. The putts rolled in.

Christian Bezuidenhout, enemy of broadcasters everywhere with his tongue-twisting name, set up a small putting gate on the other side of the same hole. Johnson’s TaylorMade fell into the hole. Bezuidenhout poured in a Titleist. Johnson a TaylorMade. And so on. Y’know that awkward dynamic of sharing a hole with someone on a crowded practice green? Yeah, the pros deal with that, too. Even at Augusta.

Part of the joy of attending a golf tournament in person is seeing these players interact. Every week, the TV broadcast shows you a rundown of talented individuals hitting golf shots. But the nature of the sport means players in different groups almost never interact. In reality, all these golfers occupy the same space! They, like, talk to each other. They walk past each other. They joke with each other. They’re real people in real places (and surreal places, especially this week) and the social dynamics of the traveling circus make those interactions interesting.

Across the practice green from the world No. 1, Pete Cowen stood with Rory McIlroy’s caddie Harry Diamond, absentmindedly swinging a wedge. Air-chipping. Eventually McIlroy showed up, too. The three chatted, laughed, began a practice routine. On the putting green, it’s hard to tell who shot 66 the day before and who shot 76. It’s a place of possibility. What will you shoot today?

In the background, the names and numbers on the seven-slot leaderboard on the end of the range shifted. The red number next to ROSE went from 7 to 6 to 5 to 4. All these players were gaining on the leader before they’d even teed off.

There was Brooks Koepka, walking down the range. If you say hi to Koepka, he’ll respond. Just don’t expect him to say it first. There was Matthew Wolff, working a brand-new driver into play. There was Jon Rahm, beginning to limber up. There was Viktor Hovland, swinging a bag of balls, default grin on his face. There was Hideki Matsuyama, trying to transform a hook into a draw, driver by driver by driver.

In person, you’re reminded these players share more than just space. Rose’s coach, Sean Foley, was on the range working with Cameron Champ. Rose’s agent Mark Steinberg was tracking Justin Thomas, Collin Morikawa, Gary Woodland. Cowen consulted with McIlroy, then moved down the range to take a look at Koepka. There’s a rhythm to it.

At typical Tour events there’s a levity to practice area conversations. Golfers arrive on different schedules; they sneak in practice where they can. They work casually on swing moves. They spend plenty of time on their phones. They talk college football.

But perhaps my favorite part of seeing pros at Augusta is seeing just how present they are. Some of these guys spend half their years playing professional golf tournaments, but they all circle this week on the calendar. They’re notably present. There’s an intentionality to their actions and to their routines. (The no-phone rule helps, too.) They have nowhere else to be. Whatever else may be right or wrong about the Masters, the tournament cares about its players and the players care about the tournament. That’s a hell of a strong foundation.

If I were a high school coach taking in the action, I’d have emerged with two takeaways for my kids.

In other words, spend more time on the range — but hit fewer balls. Slow down. Be more intentional about the swings you do make. Not all reps are, on their own, good things.

It’s difficult not to wonder just how much each player’s technology has changed over the course of the last decade. Hovland had his Trackman. Watson had his FlightScope. Dustin Johnson and Claude Harmon pored over numbers on an iPad. Just a few years ago, every part of that would have looked and felt foreign.

Masters 2021: Overheard from the (limited) gallery at Augusta National over the weekend