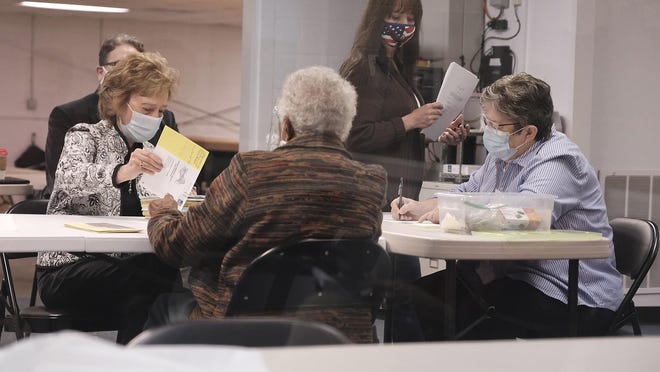 “With any election, we always have voters that happen to be here on Election Day so they show up at the polls wishing to vote, even though they are registered to vote in other counties,” Doss said.

Even with the ballot identical statewide, Georgia law requires voters to vote in their home counties, he said.

The elections board Monday approved 68 provisional ballots cast by voters who went to the wrong polling place, and two whose voter registration form arrived at the elections office after they’d voted early.

Another six votes added were cast by people whose names weren’t on the electronic poll pad, despite being properly registered, Doss said. One had registered when obtaining a driver’s license but their application wasn’t received.

Twenty-three with missing or mismatched signatures on absentee ballots were able to cure them by the Friday after the election and were added in, he said.

Rejected were 10 whose registration application missed the Dec. 7 deadline, and two who had already voted absentee when they tried to vote on Election Day, Doss said.

In total Monday the board approved 106 ballots, rejected 42 and added 34 that arrived after the initial count from military and overseas voters, Elections Director Lynn Bailey said. The board is set to certify results Tuesday.

Your stories live here.
Fuel your hometown passion and plug into the stories that define it.

The Columbia County Board of Elections counted 27 and rejected 11 provisional ballots and rejected 40 absentee ballots Friday.

The additional ballots would have little effect on vote tallies in the two counties, with 69% voting for the three Democrats in Richmond County, which had turnout of close to 56%. In Columbia County, 63% voted Republican and turnout was close to 66%.

What impeachment could look like when Pres. Trump’s term ends