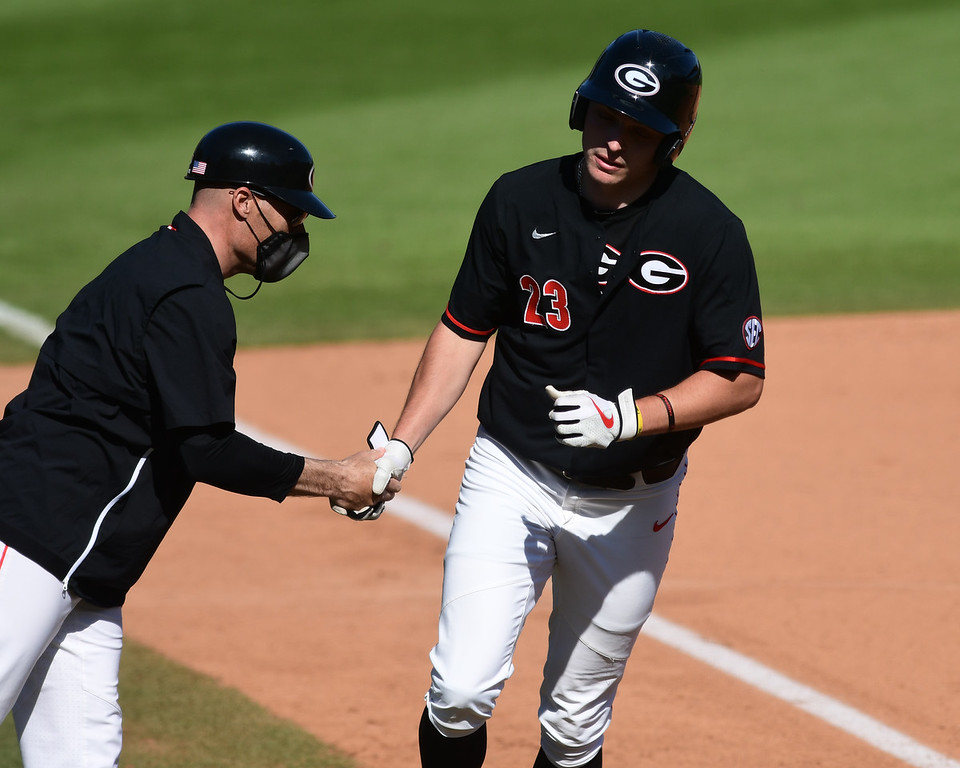 ATHENS, Ga.  — Georgia baseball bats punished some of the nation’s premier pitchers in Nashville, driving balls that turned into extra-base hits in the No. 23-ranked Bulldogs’ 2-1 series win over No. 1-ranked Vanderbilt.

UGA bookended the weekend series with a 14-2 win on Thursday and a 9-1 win on Saturday.

North Oconee High product Will Pearson pitched two scoreless innings in relief on Thursday to earn the win, improving to 2-0 on the season.

On Saturday, Sophomore starter Jonathon Cannon improved to 2-2 after pitching seven innings of scoreless baseball en route to the win.

Vanderbilt’s 2.31 team ERA was tops in the nation heading into the series. Now, three games later, Oregon State leads that statistic at 2.36.

The Bulldogs had scored nine runs in their three most recent games entering into the series against the Commodores, including two losses in which the offense mustered only one run.

In Game One against Vanderbilt, North Oconee graduate Kumar Rocker—coming into the game with a 7-0 record and a 0.84 ERA—struggled to keep the baseball from flying out of Hawkins Field.

Georgia tallied seven home runs in the series-opening win, including three off Rocker.

Entering the series Georgia had notched 26 home runs, and only six in SEC play.

To put that into perspective, the Bulldogs hit more homers in that first nine-inning game at Vanderbilt than their previous nine games combined.

Connor Tate went 7-for-12 with 6 RBIs, extending his on-base streak to 11 games in the process.

Georgia’s 27 hits sprinkled throughout the series weren’t the only key to toppling a No. 1-ranked SEC opponent for the first time since 1993.

Before the series, Georgia was slugging .407. After the three-game set, UGA’s team slugging percentage jumped to .426—an almost 20 point increase in slugging more than 30 games into the season. The Bulldogs hit eight doubles in the series.

In snapping Vanderbilt’s nine-game winning streak, the Bulldogs re-upped their own mark set in 2019 of being the most recent team to defeat Vanderbilt in a series.

Georgia next hosts Georgia State (7-24, 3-4 Sun Belt) on Tuesday at Foley Field. The opening pitch is at 5:02 EST, and the game will be available on SEC Network Plus.