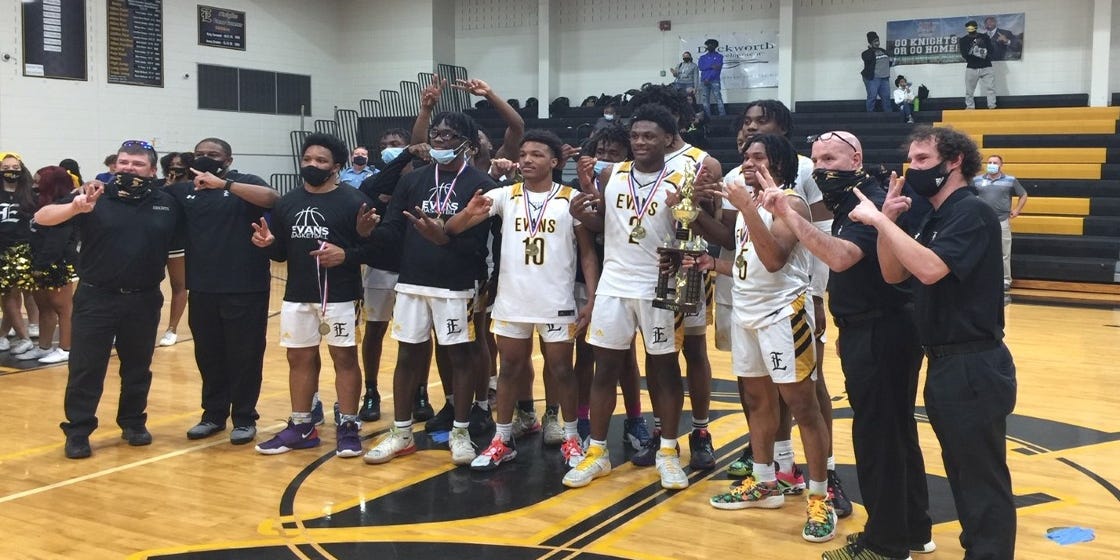 AUGUSTA, Ga. – Rashad King jogged into the gym before a late February basketball practice as the rest of his teammates stretched.

He joked and laughed, fitting in as one of many Evans High stars.

It’s hard to tell King is in only his second season with the Knights because he appears comfortable, as if he grew up in Augusta.

He calls Augusta one of his homes. For much of his life, though, home was relative as King constantly was on the move due to his parents service in the Air Force.

“Normally I would move every two, three years,” King said.

King has lived in Alaska, Virginia, Italy and Japan. He was first introduced to basketball overseas.

Roderick King remembers his son as a toddler hanging out while he served as a volunteer coach on base.

“I noticed that he could dribble the basketball,” Roderick King said. “Not only could he dribble, he could really dribble. And he couldn’t have been more than three, four, five years old.”

Back stateside, King developed into a star.

He began working on getting an edge in athleticism. In the process, King led his middle school team to two city championships.

Soon, though, the family was headed to Alaska.

“Some spots like Virginia I didn’t really want to leave, but you know, it’s life,” Rashad said. “It didn’t really phase me because I was little so I got used to it pretty quick.”

King had to learn how to fit in. Everywhere he went, he was always the new kid, and he accepted that every two or three years he was going to have to adapt again.

“It made me be able to fit in a lot easier because I wasn’t shy or anything like that because I’m always the new kid,” Rashad said.

“The one thing I took from (Georgia), there’s a lot of athletes down here, but in other places, they like to play fundamentally sound,” he said. “They don’t have as many athletes as down South. It gave me a better experience to get more fundamentally sound.”

Overseas, he was far more advanced than the kids his age. In Hampton, he had to be more athletic. In Alaska, he learned how to slow the game down.

“I really had to learn how to play fundamentally and different aspects of my game besides my athleticism,” he said.

Rashad ended up at Evans as his dad saw it as the best chance for his son to earn an opportunities to play in college. The transition included challenges.

“He came here and it was the first time he ever came off the bench in his life,” Roderick King said.

The Knights returned all five starters from the previous year’s team that finished second in the region when King arrived as a junior.

For the first time in his career, he wasn’t the star.

“We had Christian (Chambers) last year, had Josh (Mincey) coming back so I just had to find my role and once I found it, I tried to execute it as best as I could,” he said. “And in the end, it got us a region championship. … It was a really good experience, playing (with them).”

Now, King”s name is one of the first mentioned in conversations about Evans.

He learned to fit into yet another system, playing off-ball after previously playing mostly point guard. He still makes athletic plays at the rim with dunks in transition and penetration finishes. He also hits shots on the perimeter and finds the open man.

He continued to grow his game, all while being a fresh face on an established team. That’s what opened up his game in his youth and what’s going to help him at the college level. Having moved around, he’s not worried about location; he’s found many places to call home over the years.

He said he has offers from Landers University, Clayton State University, University of Arkansas at Monticello and Voorhees College and has interest from UMKC, Jacksonville State and others.

“I felt like moving around opened up my views on college and everything because location doesn’t really matter. I’ve been in the cold, hot … I’ve been there, you name it,” he said.

And even though Evans is one of the shorter stints of places King has lived, it’s made the list of the places he can call home.

“Home right now is definitely Augusta, Georgia,” he said. “I would also call North Carolina, Fayetteville, that’s where my mom, grandma and people used to stay at, so that would be home too. I would say Hampton Virginia, but I haven’t been there in a little bit.

“Between those three spots, I would call (them) home.”

Tiger Woods: an influence on and off the golf course in Augusta