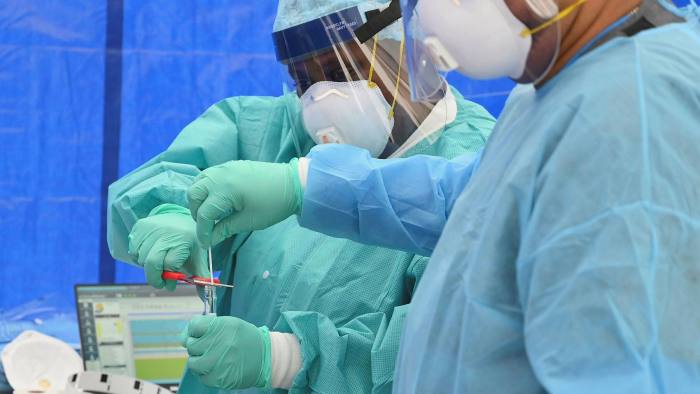 “It’s been the longest year,” he said, laughing. “It went very fast.”

After more than 160,000 tests, the lab at MCG at Augusta University is now preparing to focus more on sequencing of those positive tests to track the spread of SARS CoV-2 virus variants.

On March 16 last year, the lab found the first two cases at AU Health System and then went right into regular daily testing of samples in Augusta. But with a larger need to test across Georgia, Gov. Brian Kemp’s task force got the lab the extra equipment it needed to take on that role in April, Kolhe said. The lab began testing up to 1,000 samples a day then.

“That was a pretty high volume,” Kolhe said. After more hard work and back and forth with the FDA, the lab got the ability to switch from primarily nasopharyngeal swabs to saliva-based testing in September.

Lately, as the pace of vaccination has increased, the demand for testing has slowed, Kolhe said.

“There’s definitely a balance between vaccination, the number of people who are vaccinated, and the number of tests we need to do,” he said. “But you cannot totally get rid of testing. In a pandemic, testing and quarantine are probably the best way to have it contained.”

The form of testing will likely change, however, Kolhe said.

“As more and more people become vaccinated, we’ll come to a point where the testing will become routine tests, you don’t need to have drive-thrus (such as AU Health has now), he said. “You’ll have a lot more home tests, point-of-care tests, physician’s office tests, rather than something complicated like a PCR test” such as the GEM Lab does.

While those tests are not as accurate, the need to balance between speed and specificity mean it is probably OK as long as the test is not giving a false negative, missing an infection altogether, Kolhe said.

The rise of variants, however, means the GEM Lab will have a new role. What are called Variants of Concern in other countries have now made their way to the U.S. and are spreading rapidly.

A variant from the United Kingdom known as B.1.1.7, which has been shown to be at least 56% more infectious, has now been confirmed in 4,700 cases across the U.S. in 50 different jurisdictions, said Dr. Rochelle Walensky, director of the Centers for Disease Control and Prevention. In some states, such as Florida and California, the variant already accounts for 25% of cases, and that is only expected to increase, she said.

“Our current models still project, by the end of March, early April, B.1.1.7will be the dominant” strain in the U.S., Walensky said.

The GEM Lab is putting together a plan to do extensive genomic sequencing of positive tests, a plan Kolhe hopes to have ready by the end of the month. A lot of other labs are doing the same, he said.

“The continuous monitoring in the community of each and every positive case by sequencing is what everyone is trying to put together,” Kolhe said. “This is going to be the next place where labs will play a critical role.”