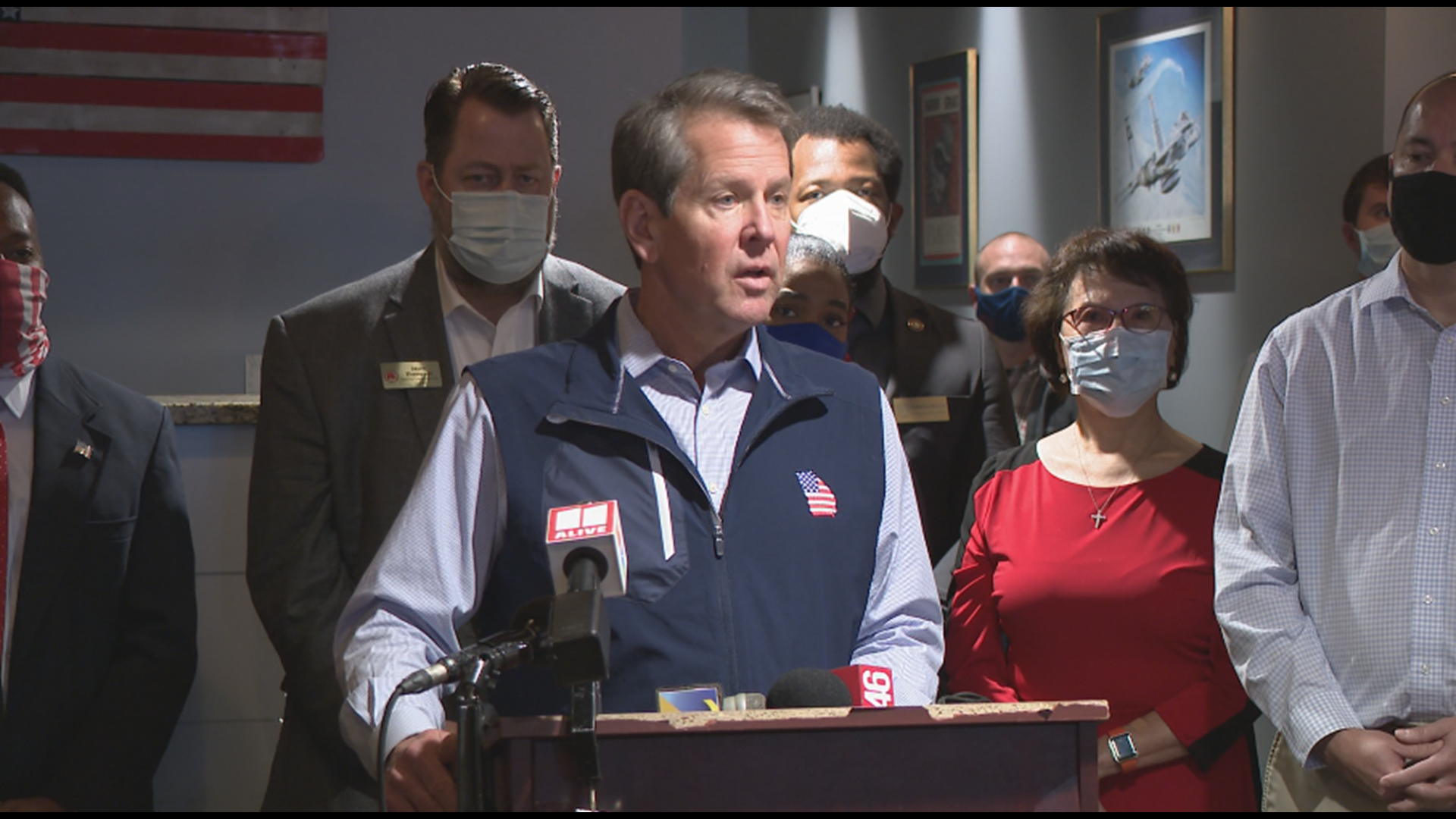 GEORGIA — Inside the Georgia State Capitol one week, visiting a Marietta restaurant the next week. Gov. Brian Kemp is already campaigning for his re-election bid in 2022.

Georgia Attorney General Chris Carr is also up for re-election next November. Carr and Kemp traveled to Cobb County Saturday to continue to defend Georgia’s recent election overhaul and point out missed economic opportunity over the signing of the law.

“Major League Baseball committed a big-league error,” Carr said. “This is about stronger security, expanded access and greater transparency to allow the public to participate in Georgia’s elections. These companies have been misguided, and I would just encourage them to look at the facts.”

Carr called MLB’s decision to move the All-Star game a kneejerk reaction to a made-up narrative surrounding the election overhaul. He said it has hurt businesses, workers and families who did not have a say in the process.

Andy Erbacher, the owner of AJ’s Famous Seafood and Po’Boys, said he was hit hard by the pandemic. He said he doubled his overhead, expanding his space to keep cooking food, but revenue lagged behind. Erbacher expressed his frustration over the All-Star game, a multi-day event, leaving Cobb County.

There was political pressure,” Erbacher said. “We’re right here next to I-75. People looking for a restaurant come into town, or headed out are looking for a place to go. We’re ten minutes off the interstate.”

Kemp criticized MLB for moving to Denver, a city with a 10% Black population. The governor said Metro Atlanta had a majority black population. Kemp said the state could miss out on up to $100 million because of the decision to pull the game.

Emory University’s Dr. Andra Gillespie said Kemp is working to appeal to the frustration of minorities surrounding MLB’s decision to pull the All-Star Game, however she believes it would not be enough to turn much of the Democratic Party’s base to Kemp’s side.

“Voting rights has become front and center in the culture wars,” Gillespie said. “He’s trying to rally the base in general, he’s trying to protect his reputation, and we can’t forget the fact that he’s running for re-election next year.”

Gillespie said Kemp will have to do much more outreach in minority communities, make amends for COVID disparities and detail initiatives that will lower instances of crime, racial profiling and police brutality.

11Alive had reached out to the Georgia Democratic Party, but had not heard a response by deadline.

There are currently five lawsuits filed against SB202. Carr said the timeline was not clear on how quickly the arguments might be resolved.