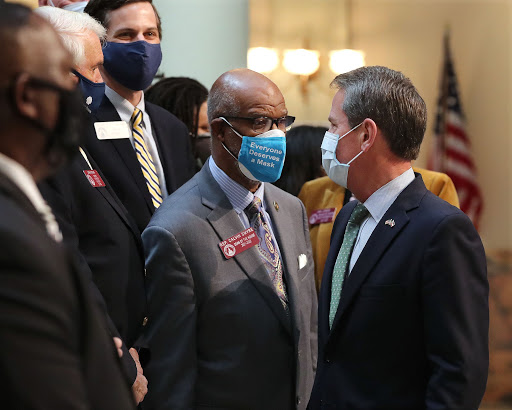 AUGUSTA, Ga. – In the name of a 25-year-old Black man killed while jogging through a Brunswick neighborhood last year, Georgia Gov. Brian Kemp pledged support in the repeal of the state’s citizens’ arrest law.

The antiquated law enacted in the time of the Civil War was ripe for abuse, Kemp said Tuesday during a press conference on the steps of the state capitol building.

Travis McMichael, his father, Gregory McMichael, and William “Roddie” Bryan were not arrested until May in Arbery’s death.

The initial decision by law enforcement in Glynn County was that Arbery’s fatal shooting was justified because it occurred during a citizen’s arrest. The McMichaels and Bryan, who now face charges of murder, claim they believed Arbery was running from a burglary.

Kemp said the citizen’s arrest law needs to be repealed and rewritten to ensure citizens are protected while law enforcement officers are able to continue their duties, every citizen retains the right to self-defense, and business owners have the right to hold someone who commits a crime on their premises.

The killing of Arbery moved law enforcement officers, civil rights leaders and Georgia legislators to join together to see that the current law is rewritten, Kemp said.