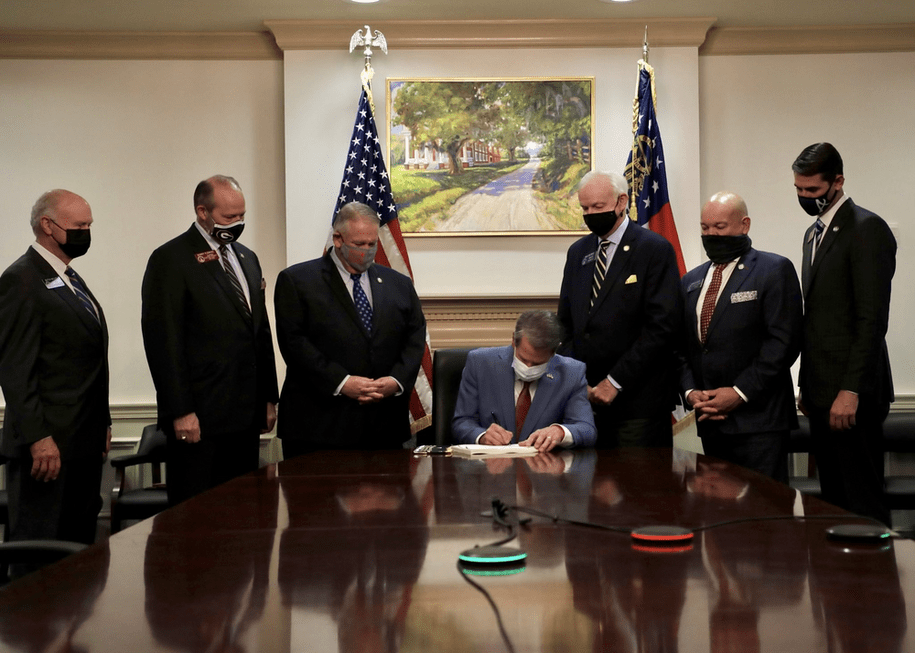 GEORGIA – GOP Gov. Brian Kemp of Georgia suggested in a Newsmax interview earlier this week that voters waiting in line to vote could order food from online delivery apps like Grubhub or Uber Eats, as he continues to face blowback for the 2021 MLB All-Star Game leaving the state over its newly-enacted voting law.

The law, known as the Election Integrity Act of 2021 or SB 202, tightens election rules in the state by limiting drop boxes, strengthening voter identification requirements, and banning water and food from being distributed by volunteers to voters waiting in line, among other measures. It has been slammed by prominent Democrats including President Joe Biden and former Georgia state House Minority Leader and potential 2022 gubernatorial candidate Stacey Abrams.

Several major companies – including Coca-Cola and Delta – have spoken out against the bill or voter suppression more broadly, which has upset Kemp and most statewide Republicans, who say the law is being distorted.

Kemp addressed one of the more contentious aspects of the law, which bars volunteers from distributing water or food to voters in line.

He added: “The county officials can provide water stations. This is just within 150 feet of the precinct. If you’re 151 feet, campaigns can set up tables, food trucks … they can hang up flyers and set up signs. This is all they [Democrats] have to grasp at.”

Kemp then accused Democratic-led jurisdictions of bungling their own election administration.

“The question too that you need to ask … Why are voters standing in line that long?,” he said. “It’s because it’s in Democratic-controlled counties. They need to do a better job of running their elections and moving people through the lines so that they’re not standing out there so long. Voters should be furious that that’s the case.”

Last year, a ProPublica and Georgia Public Broadcasting investigation found that the cause of the state’s voting issues were the state’s population growth, which has been accelerated by new residents in the blue-trending Atlanta suburbs, along with a failure to increase the number of polling precincts.

The report showed that while the state’s voting rolls had increased by 2 million people since 2013, polling locations have declined by 10 percent, especially in the populous Atlanta metropolitan region.

GOP Secretary of State Brad Raffensperger asked for additional resources and polling precincts after being elected in 2018, but was unable to push legislation through the GOP-led legislature before the 2020 presidential election, which saw Biden win the state by roughly 12,000 votes.

During the Democratic presidential primary held in the state last June, The Guardian spoke with Simone Alisa, an Atlanta voter who waited for five hours to vote after initially expecting that she might only have to wait 30 minutes.

“Something’s wrong with this picture,” she said after finally casting her vote.

Nation has Georgia on its mind, but many states are making voting easier