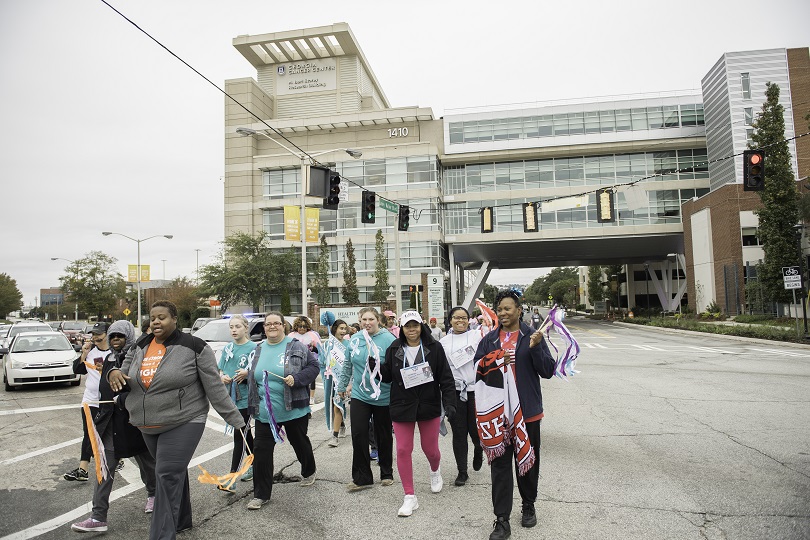 AUGUSTA, Ga. – A new outreach effort from the Georgia Cancer Center into Augusta Housing Authority communities aims to help reduce disparities in cancer rates and death among residents and help them avoid those things that increase their risk.

Dr. Marlo Vernon of the cancer center will be leading the Augusta arm of the CHANGE initiative – Cancer Health Awareness through Screening and Education, funded by the American Cancer Society and Pfizer. The outreach will enroll up to 150 residents in five housing communities for educational sessions on breast, prostate and colorectal cancers, the cancers with the greatest disparities between Blacks and whites, and about modifiable risk factors such as smoking and obesity. The study will also help direct residents to the appropriate screenings.

The nearly $400,000 study will also focus on talking to residents and patients to create a culturally competent training program for medical students, providers and others at the cancer center, Vernon said.

“We are going to talk to residents, we are going to talk to patients and people from the community about their experiences accessing health care, things they wished their doctor knew about their culture, what they see as myths that people around them might believe about cancer, just to provide providers with a better understanding about the community that we live in and how to best serve them as far as their health care is concerned,” she said.

While there is similar training available, this will be focused on Augusta and its residents, Vernon said.

“The point is to develop one that is specific to our community and what our community needs are, and that is a unique component of this project,” she said.

Nearly half of Georgia’s cancer deaths stem from modifiable risk factors, and Blacks bear a greater burden of disease and death from cancer in the state. Blacks are more likely than whites to die from multiple cancers nationally, and the gap is even worse for some cancers in Augusta. The age-adjusted death rate for breast cancer in 2019 was 15.4 per 100,000 for Blacks compared with 9.6 per 100,000 for Whites, but the rate was twice as bad in Augusta, 23.8 vs. 11.7, according to an analysis of Georgia Department of Public Health data by The Augusta Chronicle.

The housing authority has worked with the cancer center and AU before on programs, and “they’ve all proven to be very beneficial,” said L. Reta Thomas, the director of resident services. “We’ve had some people I would call success stories.”

For instance, helping people quit smoking convinced them they could make even greater changes in their lives, said Dr. Martha Tingen, the cancer center’s associate director for cancer prevention, control and population health.

“It is empowering to people to make a healthy change of something that is so, so difficult,” she said.

It is sometimes difficult for residents to talk about cancer and its impact on their families, Thomas said.

Facilitating that change is one reason Vernon said she wanted to pursue the grant.

“Being here at the cancer center has really opened my eyes to the need that our community has to get screening earlier, to understand family health history and just that intergenerational cancer prevention that is possible if we just open up those conversations,” she said.

While cancer has had a big impact on her family, Thomas said she learned from her late aunt how to stand up to it.

“There are some things that cancer can’t do,” she said. “It can’t steal your joy unless you give it to it. It can’t take your hope. On the flip side, we do need to be educated and realize even having cancer is not a death sentence.”

That education should begin with the children, Thomas said.

“If we teach early enough, then we won’t have so many disparities,” she said.