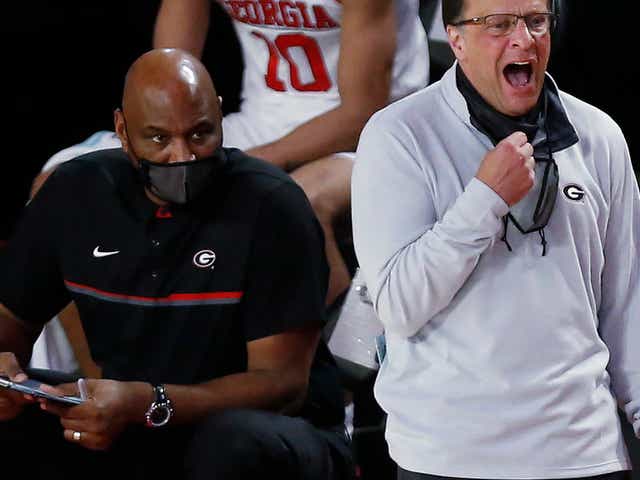 AUGUSTA, Ga. – Basketball took Michael Curry a long way from his days as a standout at Glenn Hills High in Augusta.

To Georgia Southern where he led the Eagles to three straight postseason trips. To overseas where he played in Germany, Italy, Spain, France and Belgium. To the USBL and CBA and then the NBA where he played for 11 seasons for six teams and worked in the league office in basketball operations and with the league’s development league. Back to the court to coach including a season as Pistons head coach and time with the 76ers and Pistons as an assistant, then the college game as Florida Atlantic head coach.

When his time at the Boca Raton school ended in 2018, he returned home to Augusta for something more important away from the game. He was able to help care for his mother Juanita Curry.

“I had a chance to kind of pause in my professional career and be home with her during that time,” Curry said. “It was a blessing.”

Now, he’s back in the game after being hired as a player development assistant for Tom Crean at Georgia.

“I’m continuing to provide whatever I can basketball wise and continue to learn more and more about the coaching on the collegiate level,” Curry said.

Curry remained connected to the game the last couple of years by attending high school games and college tournaments and made the trip to Athens after Crean came aboard as Georgia coach.

Crean and Curry crossed paths in 1999. Crean was hired for his first head coaching job at Marquette and Curry played for the Milwaukee Bucks. Crean dropped by at a walk-through practice.

“George Karl ended the walk-through early but there’s Michael Curry with three of the younger players out there for probably 45 minutes to an hour,” Crean said. “Working on shooting, games, playing two-on-two, things like that. That always stuck with me.”

Curry watched Crean’s teams when he was an assistant at Michigan State, then at Marquette and Indiana as head coach. Crean followed Curry’s career, too, and let him come by practices and watch games the past two seasons.

“I got to know him when I got here and over a period of time we developed a relationship and he wanted to get back into coaching,” Crean said. “The more that I was around him, the more that I totally looked at it like, we need what he brings, on this staff; not only what he brings as a coach but who he is as a person of high level respect in the sense of how he can mentor and not only help the players but, heck, he’s helped the coaches. He helps me immensely.”

“A lot things kind of worked in mysterious ways,” Curry said. “This one kind of worked out well for me because I was able to go back and forth to Augusta a couple of times a week and my wife was able to stay there when I wasn’t there.”

Curry and his wife Katrina own a house on Lake Oconee. Their youngest daughter, Crysten, went to Athens Academy before playing volleyball at Georgia Southern.

“I kind of got used to that commute,” he said.

Growing up in Augusta, Curry worked on the grounds crew for the Masters for three years starting in the ninth grade but didn’t as a senior because he took college visits. He was on the litter committee, working about 12 hours a day.

“My Dad was a big Jack Nicklaus fan and working on the grounds we were able to get our hats signed by golfers,” said Curry, who has returned to Augusta National to play the course. “My senior year, the year I visited, Jack actually won the Masters.”

“Georgia Southern was a level I was able to go to,” he said. “I was probably right at that level or a little below and I had a chance to go there and play right away. I played and got better each year.”

“There were three first round picks in that game,” Curry said. “Willie Anderson and Alec Kessler and then we had Jeff Sanders. We thought we were going to make back-to-back trips to the NCAA tournament and we lost in overtime in our conference championship game but it couldn’t be better for us then to play Georgia.”

By the time he left, he held the school record for games played with 119, starting the final 77.

The school retired his No. 20 jersey and inducted him into its athletic hall of fame in 2000.

Curry, an undrafted free agent, never averaged more than 6.6 points per game in the NBA but was a good defender. He said he always found a way to climb a team’s depth chart. Off court, he was president of the NBA Players Association

That varied background is now being used on Crean’s staff.

“The number one value was to bring it to the players, which I think we are accomplishing, but also just to have somebody with that type of experience,” Crean said.

He also tries to motivate and support the players.

“I did not know about his background,” said guard Justin Kier, a graduate transfer from George Mason. “That’s the beauty of being at Georgia, having Coach Crean who has a lot of people who help us on and off the court.”

Curry can attend practices and travel with the team for games, but can’t be on the court with the players.

“Coach Curry is always there for you,” Kier said. “He doesn’t let you slack off or anything like that, but he’s there to support, and he’s there for you. I can tell I’m in there for the long run. I can ask him a question at any time in my life, and he’ll be there. He’s a great friend, a great coach, and he wants nothing but the best for us.”

Curry went 39-43 in his one season as Pistons coach. He was 39-84 in four seasons at Florida Atlantic including an upset win at Ohio State.

In the time since, he’s worked to add to his basketball knowledge.

“I’ve always been pretty good coaching on the defensive end,” he said. “I’ve always wanted to become more creative and pick up more concepts on the offensive end.”

Now, at age 52, he’s absorbing all he can under Crean with the Bulldogs.