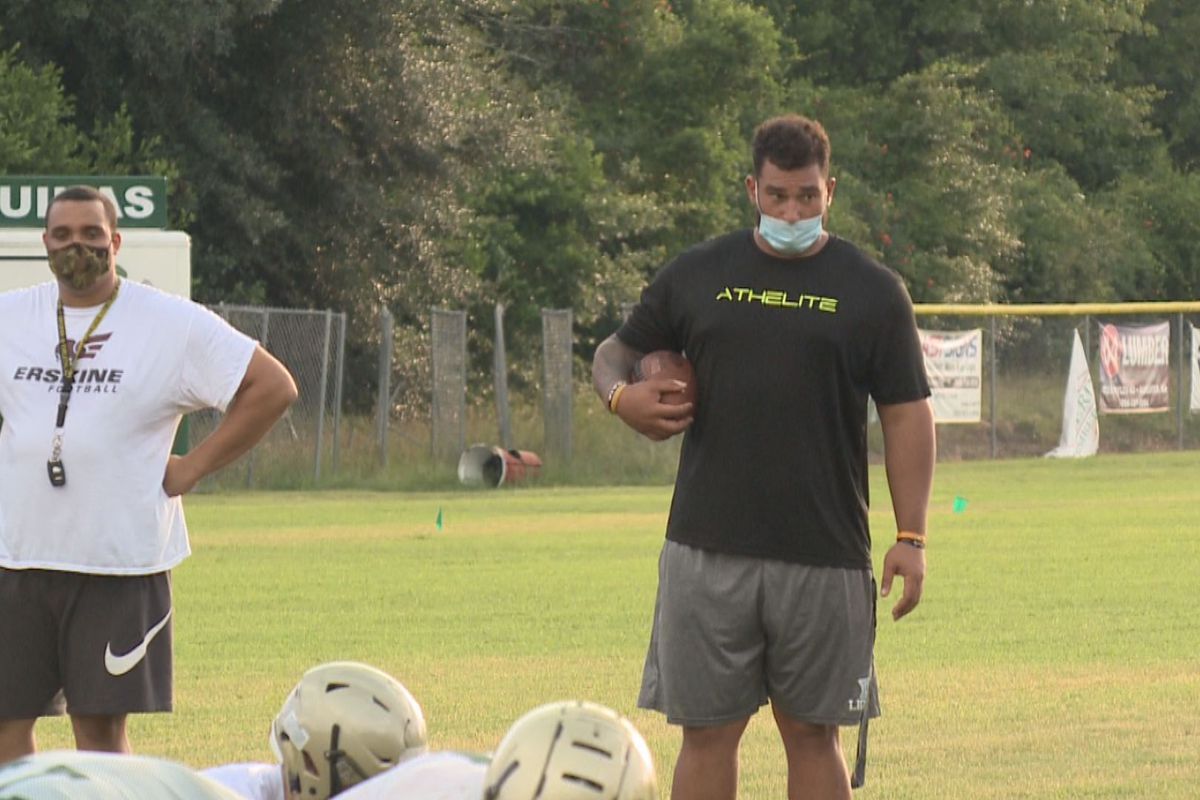 AUGUSTA, Ga. – Assistant coaches play a vital role not just to their head coaches, but to the players as well. Individual position coaches can sometimes provide more than a head coach trying to balance the entire team can. Aquinas hired a handful of new assistants, and one has a lot of experience to share.

Scott Pagano originally hails from Hawaii, though having family in Easley, South Carolina helped make his transition to the South East a bit easier. He lined up for Clemson from 2013 to 2016, helping the team earn a national title before transferring to Oregon. Now, he finds himself on the sidelines as a defensive line assistant coach for the Fighting Irish. He’s got the experience and now wants to give some of it back to the next generation.

“The biggest thing for me is about giving back. I’ve been through high school, I’ve been through college, I had a chance in the NFL, and I want to pour all that knowledge that I have back into them so they know what it takes,” said Pagano.

It’s one thing to have the experience, it’s another to know how to use it. Each level of football requires a different style of coaching. Pagano volunteered at Daniel High School in Central, South Carolina before coming to the CSRA and learned he can’t always have the same intensity and expectations as he did with the Tigers or Ducks.

“I think just being patient, really. I’ve got to remember I’m at a high school level, there’s a lot of teaching and development you’ve got to do. In college, you get recruited so you’re supposed to do ‘this’ and if you’re not, you’re not playing,” Pagano continued.

Pagano isn’t the only new assistant coach joining the Irish this season. Tyler Williamson, a former Aquinas player, will also be joining the team soon. He’s been serving in the Air Froce since graduating.

Dan Szatkowski (pronounced shuh-COUGH-ski) was also hired this year as the offensive line coach. Affectionately known as “Coach Ski,” he brings more than 30 years of experience coaching at the high school and college level to the Irish. He and Pagano will be working closely on both sides of line.

“Coach Ski has a high motor. He’s a high energy guy. Sometimes I’ve got to match his. It’s great man I’m really excited to work with him and get going this season,” said Pagano.

Pagano is no stranger to intensity after playing under Clemson’s defensive coordinator Brent Venables, though coach Ski’s intensity won’t be quite as intense.

“Oh no not yet! That’s a different intestity level,” Pagano finished with a laugh.

The Irish are scheduled to scrimmage Lincoln County on August 21st. They open the season on September 4th on the road against Harlem.