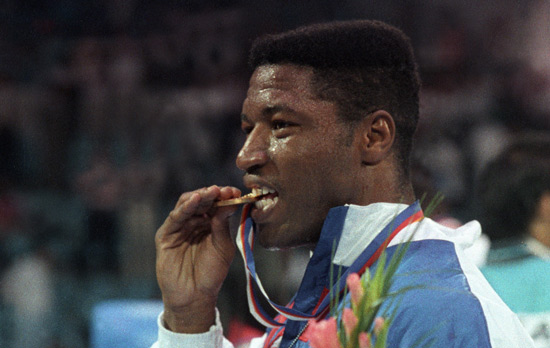 AUGUSTA, Ga. – Some might call Ray Mercer a late bloomer

Others … a late boomer.

His father thought the Army might give him some focus, and it turned out his father knew best.

Stationed in Germany, Mercer said he agreed to become a sparring partner for the base boxing champion in order to avoid a month-long training exercise.

Although he had never put on a pair of gloves, Mercer soon displayed a stunning talent for what some call “the sweet science.”

His boxing prowess grew throughout military competition and in the fall of 1988 he was representing the United States as its heavyweight competitor in the Summer Olympic Games being held in Seoul, South Korea.

That’s where a problem arose. According to newspaper accounts, Korean judges were suspected of unfairly favoring their own competitors. Opposing boxers could lose on points.

He knocked out every opponent he faced, including a Korean in the championship round. That had never been done before, and hasn’t been done since by an American boxer.

“I knew I had to knock out the South Korean in the final,” Mercer later told the USA Boxing website.  “I just wanted to do what I could to be the Olympic gold medalist.  I don’t think I used a jab .

(Most accounts say it was a “right-left combination.”)

After his Olympic success, Mercer – who had picked up the nickname “Merciless” – began a professional boxing career that also took him to the top of the sport.

He was the WBO heavyweight champion in 1991 and would conclude a successful 36-7 career in which he faced off against such champions as Larry Holmes and Evander Holyfield.

Always supportive of the Army and its veterans, Mercer returned to Augusta in 2017  with his father – also a veteran – to meet soldiers at the Veterans Administration hospital to thank them for their service.

“Without the vets, a lot of us wouldn’t be doing what we’re doing. The vets are why we’re free,” he said in a Chronicle interview. “I always feel safe knowing that they are around.”

Mercer also said he knows the pain that many of the veterans are experiencing from his boxing days.

“Boxing is a hurt game. A lot of boxers get depression and concussions so boxing is a little bit like war,” Mercer said. “That connects us, too.”

Last minute shopping? Here’s where you can still pick-up gifts and groceries