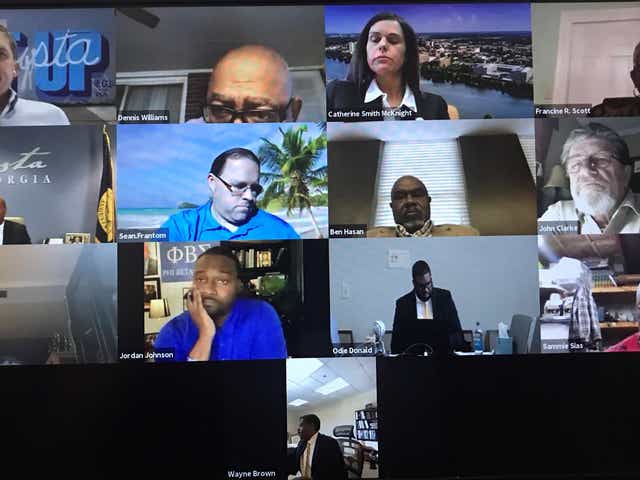 AUGUSTA, Ga. – The question of raises for Augusta’s mayor and commission and possibly changing the government’s structure was pushed to a later commission meeting but not defeated Tuesday.

The Augusta Commission also voted Tuesday to lift a ban on events held at city facilities, but only for one event.

Commissioner Ben Hasan, who has called to reexamine the salaries, said he disagreed with Mayor Hardie Davis’ proposal to create a blue ribbon panel to perform a broad evaluation of the government.

Among the panel’s considerations might be a look at the powers of the commission, mayor and city administrator, Davis has said.

Hasan said the commission is who should determine whether the Augusta-Richmond County Consolidation Act, originally authored by state legislators, needs to be changed.

“I’m of the mindset that we didn’t need to do a blue ribbon committee,” Hasan said.

Hasan said he’d observed Davis taking an aggressive approach to being mayor, so an increase in responsibility wasn’t needed.

“In the last couple of months in particular, I’ve watched you … rebrand yourself, being more proactive, taking more initiative,” Hasan said. “No other mayor has really done those kinds of things … those things have value.

“The path that you’re going on, I don’t think there has to be more responsibility,” he said.

Mayor Pro Tem Bobby Williams said “we could talk about this all day” and motioned to move it to next week’s commission meeting without a recommendation. The motion passed in the city administrative services committee 3-1, with Hasan opposed.

On the issue of city events, Commissioner Sean Frantom moved to remove the restriction for the Augusta Saturday Market at the River, the downtown market with local vendors, and let a “working group” return with broader recommendations.

All events held on city properties and rights of way have been canceled since the pandemic began. The Centers for Disease Control and Prevention continues to advise against attending group events with non-household members but has provided guidelines if they are held.

There is an “appetite to expand beyond the market” to other city events, Administrator Odie Donald said. He said the shuttered market is costing the city “revenue” but has a plan to reopen safely.

The administrative services committee also approved Donald conducting a study of the impact of giving landlords who have suffered during the pandemic a tax break, a Davis request.

Commissioner Sammie Sias questioned which landlords would get the breaks, as some apartment complexes are owned by out-of-town corporations.

A recent announcement by Gov. Brian Kemp about a $552 million rent assistance package goes directly to landlords and tenants, while Davis’ proposal is different.

“None of the other offerings have carved out support for landlords in the way that this one has,” Donald said.

David Perdue won’t be running for Senate, after all