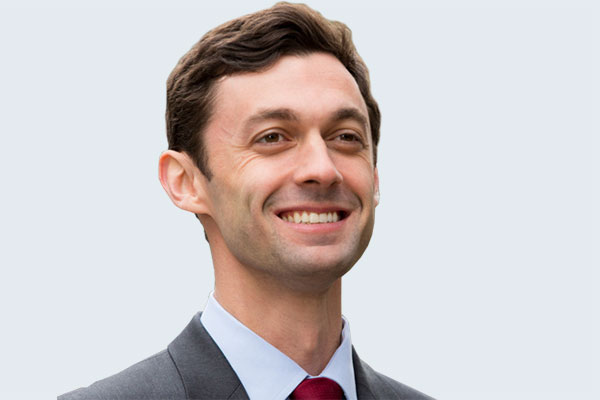 AUGUSTA, Ga. – Registered nurse Katy Cunningham had a surprise Wednesday for U.S. Sen. John Ossoff, D-Ga., as he toured the East Central Health District COVID-19 vaccination site at the former Craig-Houghton Elementary School. On her scrubs she wore a sticker that read, “Vaccinate Your Ossoff,” a play on one of his previous campaign slogans.

Ossoff praised the work of Cunningham and other workers as he toured the facility and briefed local leaders on public health funding and other measures in the American Rescue Plan recently passed by Congress.

“I was sent by the people of Georgia to deliver resources to defeat COVID-19,” he said. “Congress has delivered those resources, and as evidenced by this facility and the great work the medical teams here are doing and the work local leaders are doing, we are working as a team to expand access to the COVID-19 vaccine.”

There is more work to be done, as evidenced by wildly different vaccination rates by counties across not only the Augusta area but also across the state, according to data from the Centers for Disease Control and Prevention. There is also concern from rising rates of infections and serious illness, said CDC Director Rochelle Walensky during a White House briefing Wednesday. She noted new cases are up 10.6% over the previous week and hospitalizations have risen 4.6%.

“As we see increases in cases, we can’t afford to let our guard down,” Walensky said. “We are so close – so very close to getting back to the everyday activities we all miss so much, but we’re not quite there yet.”

While urging more vaccinations, Ossoff also asked that people continue to follow those CDC guidelines to wear a mask in public and avoid crowded indoor gatherings

“There is a risk of a fourth wave of this COVID-19 pandemic, and the best way for us to prevent that is to follow the advice of medical experts and to get the vaccine,” he said.

But those vaccination efforts have not proved equally successful across the Augusta region. Richmond County has fully vaccinated 21,755 people, nearly 14% of its adult population, including 36.6% of those 65 and older. But other area counties are lagging far behind that – McDuffie County was listed as vaccinating only 698 people or 4.4% of its adults, including 12.3% of its seniors.

For instance, the East Central Health District provided 1,968 vaccinations in Glascock County, but the CDC shows only 106 people vaccinated there, In fact, the district and many of the rural health departments “do an excellent job” of getting the vaccine out in those areas, said Dr. Stephen Goggans, the health district director. “It may just be a data capture problem.”

Still, the health district is standing up a second mobile unit to do vaccinations in hard to reach areas and for populations that might have access barriers to getting the vaccine, he said.

The funding from the American Rescue Plan is intended to help with that, Ossoff said.