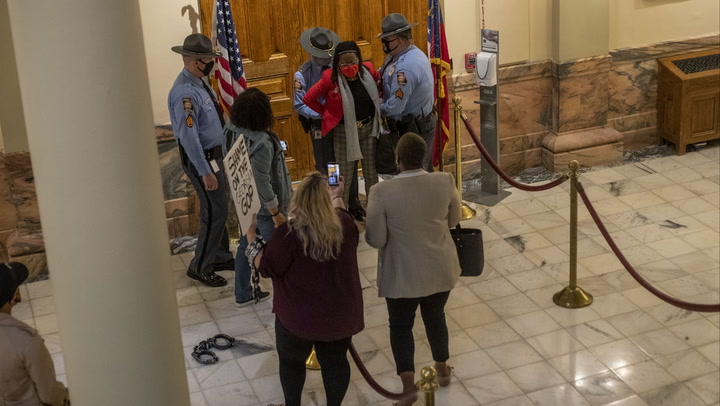 GEORGIA— A Georgia State Patrol officer who arrested Democratic state Rep. Park Cannon last week when she protested the governor’s signing of a law that restricts voting said the Jan. 6 attack on the Capitol was “in the back of my mind” during the incident.

Lt. G.D. Langford detailed in a 13-page incident report obtained by NBC News how he repeatedly asked Cannon, a Black female lawmaker, to stop knocking on Republican Gov. Brian Kemp’s office door where he was signing the law, but she continued to do so. He said that he “noticed the other protestors began to get louder as she was refusing to follow commands.”

“I felt that if I did not take action, the other protestors would have been emboldened to commit similar acts,” the officer said in the report.

“The events of January 6, 2021, at the U.S. Capitol were in the back of my mind,” Langford wrote. “I didn’t want the protestors to attempt to gain entry into a secure part of the Capitol. I believed Cannon’s actions of obstructing law enforcement in front of agitated protestors to constitute a breach of the peace.”

Langford said he then told Cannon he was arresting her and placed her in handcuffs, and along with other officers who gave statements for the report, described her as repeatedly resisting arrest.

In a statement to NBC News, Cannon’s attorney, Gerald Griggs, called the officer’s statement “a false equivalence. The facts, videos and witnesses are inconsistent with the allegations made in the police report.”

The contents of the incident report were first reported by The Atlanta Journal-Constitution.

Video of the incident showed Cannon being handcuffed last Thursday after she knocked on Kemp’s door as he signed the law in a closed-door ceremony.

She was taken to the Fulton County Jail and was released on a $6,000 signature bond that evening, said Griggs, the vice president of the NAACP’s Atlanta branch.

Georgia legislator ‘shaken’ after being ‘dragged’ out of state Capitol