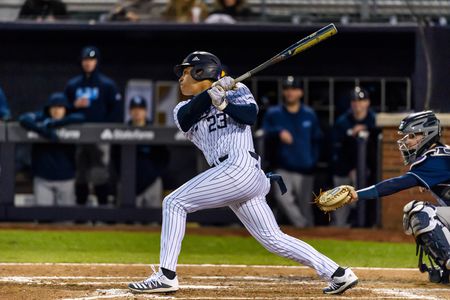 Right fielder Stephen Reid had the winning RBI with a 2 run home run in the eight to break the 2-2 tie. Reid, Luke Waddell, Tres Gonzalez and Austin Wilhite each had 2 hits to pace the Jackets 12 hit attack.

Georgia Tech took an early 1-0 lead in the second inning. Justyn-Henry Malloy doubled to right center and then advanced to second on a one out infield single by Reid. After Jake DeLeo went down swinging, Andrew Jenkins singled in Malloy for the first run of the game. Wilhite then walked to load the bases with two outs. Notre Dame went to the bullpen and got out of the jam by striking out Gonzalez on a 3-2 pitch.

Two singles and a two out double in the bottom of the second by Notre Dame tied the game at two.

Another two out double in the fifth gave Notre Dame their first lead of the game. The double followed a walk and a sacrifice bunt.

The Jackets tied the game at 2 in the top of the seventh. Wilhite started the inning with a single, stole second and advanced to third on a wild pitch. The next two batters failed to score Wilhite and it looked as though Notre Dame would get out of the inning before a Waddell infield single scored Wilhite from third.

Siegel entered the game in the seventh in relief of Crawford and held the Irish scoreless.

Drew Compton was hit by a pitch to start the eighth and Reid followed with a 2-run homerun to center to give the Jackets a 4-2 lead. Jenkins was then hit by a pitch and Wilhite doubled him to third with one out but Gonzalez and Kevin Parada were unable to bring Jenkins in from third.

Dawson Brown and Bartnicki combined to shutout Notre Dame in the eighth giving up only one hit. Brown retired the first two batters in the inning. Bartnicki came out to pitch the ninth and set the Irish down to pick up his fourth save of the season.

Notes – Coach Danny Hall shook up the lineup moving Gonzalez to the leadoff spot and Waddell back to the three-hole. Reid started in right field for the second straight game.

The Jackets face Auburn at home Tuesday. First pitch is 6PM. The Jacket starter is TBD.

Biden hails electric battery settlement as ‘a win for American workers,’ with Georgia factory on the way