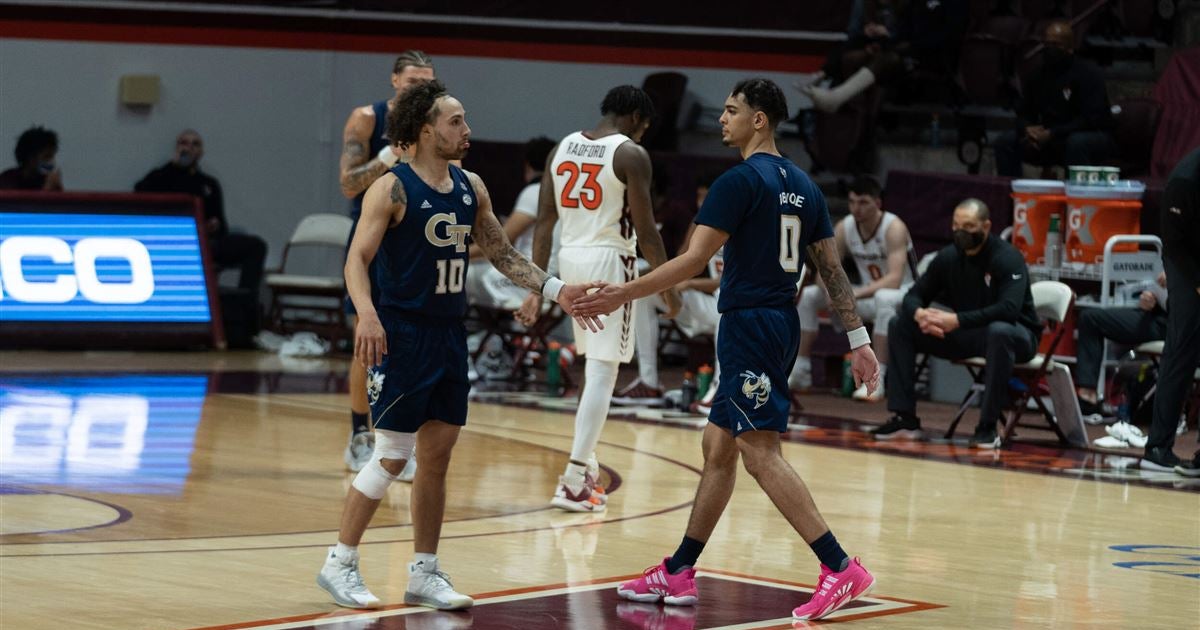 GEORGIA – The Georgia Tech Yellow Jackets (12-8, 8-6 ACC) traveled to Blacksburg and knocked off the 16th ranked Virginia Tech Hokies (14-5, 8-4 ACC) by a score of 69 to 53. The Hokies, who have not played a game in 17 days, really looked rusty from the start. Despite the final score, this game was tied 24 to 24 at halftime. Out of halftime, the Yellow Jackets outscored the Hokies 14 to 4 in the first six minutes, which really opened the game up. The Hokies cut it to 8 late in the second half, but the Georgia Tech defense was too much to overcome.

Despite the outcome, Virginia Tech’s offensive output was not awful—they shot 41.3% from the field and 35.7% from the 3-point line, in addition to outrebounding the Yellow Jackets 31 to 23. On the other hand, however, the Hokies were sloppy with the basketball, turning the ball over 16 times. The Hokies were once again led by their leading scorer, Keve Aluma. Aluma seemed frustrated at times by the Georgia Tech zone but still was able to finish in double figures, with 12 points and 14 rebounds, and even 5 assists.

Sophomore guard Nahiem Alleyne also finished in double figures for the Hokies, with 12 points on 3 of 12 from the field. He was never able to get it going from downtown, however, hitting just 2 of his 7 shots from deep.

Despite early foul trouble, Justyn Mutts finished with 9 points on 4 of 6 from the field. Has was able to add 5 rebounds but was careless with the ball, turning it over 4 times. Virginia Tech welcomed back sophomore guard Tyrece Radford tonight in his first game since his suspension. He finished with 11 points and 3 rebounds on 4 of 6 from the field.

Virginia Tech looks to bounce back on Saturday, February 27th, when Wake Forest travels to Blacksburg for another ACC clash. The game will tip off at 4 PM Eastern Time.

Georgia Tech added a huge resume-building win tonight due to their stifling defense, which forced 16 total turnovers and 9 steals as a team. The Yellow Jackets had Virginia Tech on their heels the entire game, which was evident from the very beginning. On the offensive end, Georgia Tech finished 52% from the field and 40% from the 3-point line.

Georgia Tech’s top 3 scorers tonight accounted for 51 of the team’s total 69 points. Leading the way was senior big man Moses Wright, who finished with 26 points and 10 rebounds in a career night. Overall, he scored on 9 of 11 from the field and 7 of 11 from the free throw line.

Defense was a huge part of the Yellow Jacket’s victory tonight in an effort led by Jose Alvarado. The senior guard, who leads the ACC in steals, had another 5 steals tonight. Alvarado also finished in double figures with 13 points, 3 rebounds, and 3 assists on 50% from the field. He was also very efficient from deep, knocking down 3 of his 5 attempts.

Michael Devoe, who was coming off his best game of the season, also finished in double figures, with 12 points and 4 assists. He has done most of his damage from deep this season but was only 1 of 6 tonight from beyond the arc.