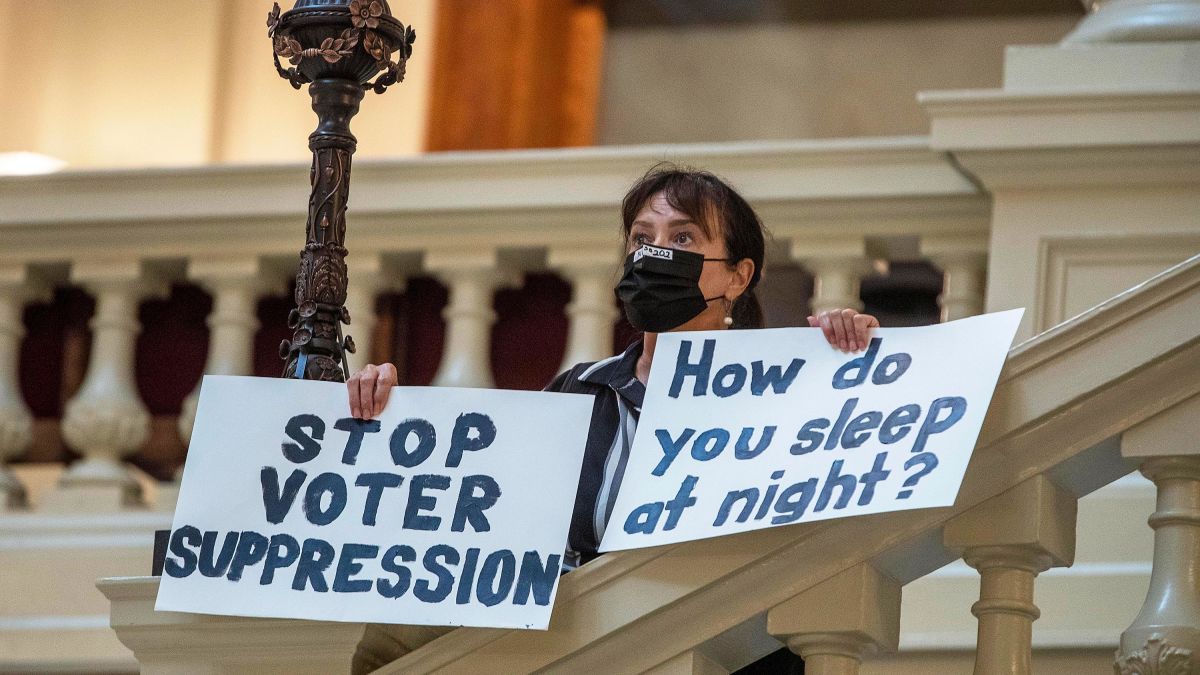 Republican proponents of the law say the critics who accuse them of “voter suppression” are mischaracterizing both their intentions and key provisions of the law. They claim the law not only makes Georgia’s elections more secure but that it expands access to voting.
That’s highly misleading at best. As critics have correctly said, the law imposes significant new obstacles to voting. It also gives the Republican-controlled state government new power to assert control over the conduct of elections in Democratic counties.
The law does, however, contain some provisions that can be reasonably be described as pro-voting, and critics have not always described all of the text accurately.
Here is an explanation of some — though far from all — changes made by the 98-page law. Our research was assisted by the work of Georgia Public Broadcasting political reporter Stephen Fowler, who published a thorough explainer on Saturday.
And under the new law, if a majority of the five-member board decides that a county’s elections officials have been doing their job poorly, the board can suspend those officials and replace them with one person the board has hand-picked to serve as a temporary superintendent, with the same powers the officials had.
The new law allows the state board to sideline elections officials in up to four counties at a time. A majority of the board would have to decide that the officials demonstrated “nonfeasance, malfeasance, or gross negligence” in at least two elections over a two-year period, or that the county officials committed at least three violations of election law or board regulations in the last two general election cycles and had not “sufficiently remedied” these violations.
This provision is a concern to officials and activists in large Democratic-run counties like Atlanta’s Fulton County, whose elections administration has been attacked by former Trump and other Republicans.

The new law requires each Georgia county to have a minimum of one drop box for absentee ballots. In 2020, when drop boxes were used for the first time in Georgia, the boxes were authorized by special pandemic-related rules rather than by long-term legislation.
However, the new law also limits how many drop boxes each county can have, how many hours and days the boxes can be open, and where they can be located.
The law says that each county can’t have more than one drop box per early voting site or per 100,000 active registered voters, whichever number is smaller. This provision will dramatically reduce the number of drop boxes available in some large counties. Fulton County, for example, says it would go from 38 drop boxes in the November election to eight in the future.
In addition, the law says that drop boxes need to be located at elections offices or inside early voting locations. And it says the boxes can only be available during the hours that early voting is available. (If the governor declares an emergency, the boxes can be located outdoors.) In 2020, drop boxes could be located outside, available 24 hours a day, and open until the evening of Election Day.

Another early voting day in primaries and general elections

There was extensive media coverage of initial Republican proposals to eliminate or sharply reduce early voting on Sundays, when some Black churchgoers participate in “souls to the polls” voting drives. However, these proposals did not make it into the final bill Kemp signed — which actually ends up expanding early voting in many counties for primaries and general elections. Runoffs are a different story, which we’ll get to in a moment.
Under the weekend provisions of the previous law, counties had to open for early voting on only one Saturday during primaries and general elections, from 9 am to 4 pm; Sundays were not mentioned. Under the new law, two Saturdays of early voting are mandatory — from 9 am to 5 pm at minimum and from 7 am to 7 pm if counties desire — and two Sundays are explicitly made optional.
The old law said early voting had to take place during “normal business hours” on weekdays, leaving counties to decide what counts as “normal.” The new law sets a specific time period, requiring early voting to be offered from 9 am to 5 pm. However, it also says that counties can open early voting as early as 7 am and end as late as 7 pm if they want to. In the 2020 general election, Fulton County, DeKalb County, Clayton County, and various other Democratic strongholds held their early voting hours between 7 am and after 7 pm, so they would not be forced into reductions.

The law significantly shrinks both the overall length of runoff campaigns and the early voting period for runoffs. (Some context: Democrats won both of the US Senate runoffs held in January 2021, which gave them control of the chamber.)
The new law sets the runoff election day four weeks after the general election, down from the previous nine weeks. The new law also eliminates two of the three weeks of early voting that used to be required in runoffs.
The new law says early voting has to occur at least from Monday to Friday in the week before the runoff election day. It also says the runoff early voting period has to start “as soon as possible,” so it’s possible that some counties will offer more than the single Monday-to-Friday period. But other counties might well not do so.

The law makes a number of changes to absentee voting. Notably, it shortens the duration of the absentee voting period and changes the identification requirements for absentee voters.
Under the new law, absentee ballots are allowed to be sent out to voters 29 days before an election, down from the previous 49 days before an election. Voters are allowed to request an absentee ballot a maximum of 78 days before the election, down from 180 days. And the applications have to be received by elections officials no later than 11 days before the election, a reduction from the previous effective deadline of four days before the election.
State and local governments are now prohibited from sending out unsolicited absentee ballot applications. (Because of the pandemic, Raffensperger had applications sent out to all active registered voters for the June 2020 primary.) And third-party groups can face financial penalties if they mail applications to people who have already applied for a ballot.
The law also does away with the signature-matching system Georgia used to use to check the identities of absentee voters. Instead, voters will have to provide their Georgia driver’s license number, the number on their state identification card, or the last four digits of their Social Security number. If they don’t have any of that, they can provide one of several alternative forms of identification, such as a copy of a utility bill, bank statement or government check. Advocates of the change say that this identification system is more precise than subjective attempts to try to match handwriting, while critics note that the new requirements are disproportionately likely to burden Black voters.

A food and drink restriction

Another section of the law, which has generated criticism from Biden and others, limits how voters can be provided food and drink in the vicinity of a voting location.
The law makes it a misdemeanor for “any person” to give or offer “any money or gifts,” including “food and drink,” to any voter within a polling place, within 150 feet of the building housing a polling place, or “within 25 feet of any voter standing in line to vote at any polling place.”
This provision is located in the same paragraph as a provision banning campaign activity in these locations, but the provision doesn’t prohibit only people who are campaigning from giving out food and drink. It says “any person,” not just campaigners.
There is, however, one exception: poll officers are allowed to make available “self-service water from an unattended receptacle to an elector waiting in line to vote.” And it’s perhaps worth noting that there is not a prohibition on voters in line buying food and drink for themselves; the provision is about other people providing “money or gifts” including food and drink.

Again, we can’t list every single provision of the dozens contained in the bill. But here are some others.
The law allows the attorney general to create a “hotline” for voters to report alleged voter intimidation and illegal election activities.
The law does not let counties use mobile voting facilities — like the two voting buses Fulton County used in 2020 — unless the governor declares an emergency, and only then to supplement the capacity of a particular polling place where the emergency occurred.
The law guarantees that any one Georgia voter can challenge an unlimited number of other individuals’ qualifications to vote.
The law says that anyone who shows up to vote in the right county but in the wrong precinct will not have their provisional ballot counted unless it is cast after 5 pm and the voter swears a statement that they cannot make it to the right precinct on time.
The law will require a ranked-choice ballot to be sent to military and overseas voters in primaries and general elections, along with a standard ballot. The ranked-choice ballot will be counted in the event of a runoff.
The law mandates that if precincts of a certain substantial size had lines of more than one hour in the previous general election, or did not complete voting by an hour after the official poll-closing time in that previous general election, county officials have to reduce the size of the precinct or get more poll workers, voting equipment or both for the next election.
Related Topics:
Up Next