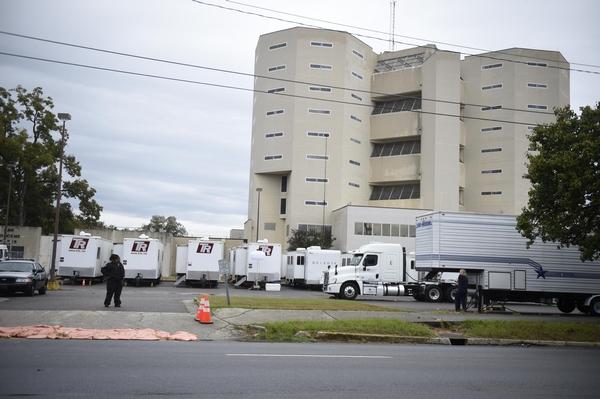 AUGUSTA, Ga. – Augusta officials voted Tuesday to proceed with demolition of a former law enforcement center despite a chief judge’s order to remodel it for use as COVID-19 emergency court space.

After two hours behind closed doors, the Augusta Commission voted 8-2 to demolish the 401 Walton Way structures, which include a six-story jail that enjoyed recent use in major film productions. Commissioners Bill Fennoy and Sean Frantom voted no.

After the vote, Mayor Hardie Davis said the city was preparing to issue a statement, but it was not available as of press time Tuesday.

“It also sends a message to the judge about his actions on Friday,” he said.

“We are completely blindsided to the plan to try to use COVID to get what the request was,” Commissioner Brandon Garrett said Monday. “The request seems very underhanded.”

His order demanded a 330-day renovation project at the facility to address COVID-19 concerns. The plan reminded most on the commission of his prior demand to convert the building to a juvenile justice center.

Brown has pressed for years to convert the center and former county jail to a juvenile justice center, and he selected a committee that determined the project was safe and feasible. The commission later agreed to build a center using future sales tax dollars, but not convert the former jail.

The jail, used for filming the DC Comics “Suicide Squad” sequel last year, has not been used as a set since February, as the industry has slowed nationwide because of the pandemic, according to Garrett. The commission voted last year to delay demolition for a year to test the facility’s viability in film production.

Brown’s order cited a “serious judicial emergency” in which those involved in the court system – inmates, staff, judges and juries – are at a “high risk of infection” with COVID-19.

He said the system has a backlog of 3,500 criminal and 21,000 civil and domestic cases, while 520 criminal cases are unindicted. At the Charlie B. Webster Detention Center, there are 727 felony inmates and 50 misdemeanor inmates being housed a cost of $54 per day.

The Richmond County Sheriff’s Office announced Monday that seven of nine inmates it had tested at Webster were positive. All 22 in the inmate unit were quarantined.

Under the state COVID-19 judicial emergency order for reopening the courts, circuits are encouraged to “locate additional space” and “provide more room,” particularly for jury trials. Doing so without the Walton Way facility plus a second courthouse annex – at the nearby former Craig Houghton school on Fourth Street – will create a hardship for the courts, Brown said.

The annex projects will enable the rendering of justice “to all citizens, including juveniles,” the order states.

The commission recently agreed to swap city property by T.W. Josey High School with the Richmond County Board of Education for the former Houghton school, although the transaction has not been recorded.

“I’m just saying that I think that it’s an awful ambitious undertaking, and I think that it’s a possible judicial overreach,” Clarke said. “Our coffers right now are stretched kind of thin” for Brown “to have a hissy fit and have y’all spend a bunch of money.”

Clarke said there are various ways Brown could address space shortages, including holding night court or using the commission chamber, which was built to serve as a court annex and includes an inmate entrance, holding cell and gun port for deputies to store their guns.

To date, Brown has not requested the chamber for use.

The Augusta Judicial Center and John H. Ruffin Courthouse, which opened in 2011, has 16 courtrooms and cost taxpayers $67 million. It includes court and office space for superior, state, magistrate and probate courts; court clerks; and offices for the district attorney and state court solicitor.

McDowell was serving as interim when the commission recently interviewed three finalists for recreation director. The The two other two finalists for the job had worked in much smaller cities and had each resigned abruptly from their prior recreation positions.

Garrett said the commission is pushing to make the Sept. 9 deadline for a new hire “because the city of Augusta needs a good administrator.”