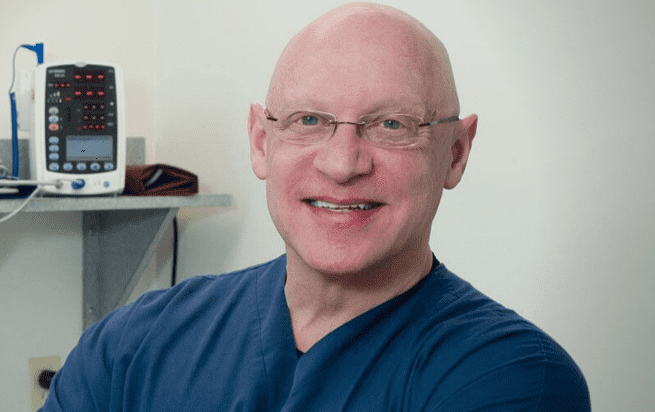 After nine years of going to the same gynecologist, this woman made a very unsettling and nauseating discovery about her doctor that pushed her to file a lawsuit against him. It was only when she went for an ultrasound exam in April when she began growing suspicious of the doctor.

The woman, Morgan Hellquist, had been visiting the gynecologist, Morris Wortman, and trusted him to perform several medical procedures on her. Since she had known him from childhood, Morgan’s family saw him as sort of a “hero,” and so, she had no qualms about letting him perform vaginal and breast examinations on her.

Dr. Wortman was also the doctor who fitted her with two IUD contraceptives among other intimate procedures. But, she found it strange when he asked her to take off her mask and said she looked better without it. The situation only got creepier when Dr. Wortman called his wife into the examination room and asked her if she could see the resemblance between Morgan and himself.

The doctor also gleefully told Morgan: “You’re really a good kid, such a good kid.” That day, Morgan left the appointment with doubts that took about a month to confirm that Dr. Wortman was her biological father.

Up until then, Morgan thought her father was a medical student at the University of Rochester, in upstate New York. She knew that she was conceived by artificial insemination, which was carried out by Dr. Wortman the 1980s.

Her mother, Jo Ann Levey went through several attempts at conceiving through artificial insemination until finally, in 1985, she became pregnant. Dr. Wortman claimed that the sperm belonged to a medical student, who met the parameters on their checklist.

Soon, Morgan was born and her birth was considered a miracle that Dr. Wortman was praised for. At the age of 8, Morgan was told that she was artificially conceived.

Over the years, Morgan had never met her father, or at least she thought she hadn’t; but the reality was that whenever she visited the “family hero” Dr. Wortman, she was actually meeting her biological father and had absolutely no idea about it.

Right from the year 2012 all the way till 2021, Morgan would go to the gynecologist and allow him to examine her while she was sedated. “Wortman would knowingly treat his own biological daughter as a gynecology patient for almost a decade,” stated the lawsuit that Morgan filed against him.

Not only did the DNA test confirm that Dr. Wortman was her biological father and had committed fraud, but it also revealed that he had secretly fathered seven other children by impregnating his patients with his sperm. Morgan is now suing the doctor, who works at The Center of Menstrual Disorders in Rochester, New York, on the grounds of medical malpractice, lack of informed consent, battery, fraud, negligence, and infliction of emotional distress.

Woman ‘discovers her creepy gynaecologist is her father after nine years of intimate examinations’ https://t.co/YdOA8jPCzN