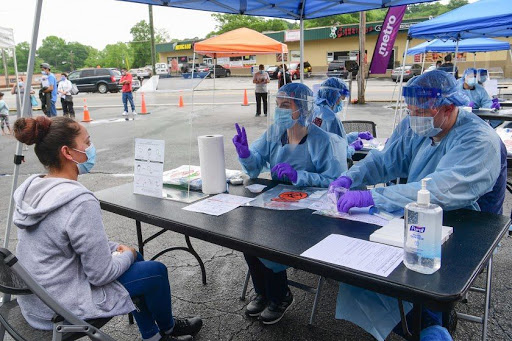 AUGUSTA, Ga. – Georgia continues to see good news and bad news in the pandemic in lower new COVID-19 infections but more than 100 new deaths on Thursday.

Richmond County suffered a new death for 347 total, Jefferson County lost two patients for 53 and Screven County had a new death for 17, with a death in Aiken raising the area’s toll to 915.

Georgia Public Health got the results of 30,161 new tests, of which 7.09% were positive, well below the overall rate of 10.69%, which fell slightly, according to an analysis by the Augusta Chronicle. The seven-day average for new cases also fell from 2,295 to 1,975.29, the analysis found.

University Hospital continues to see a decline in its COVID-19 inpatients to 54 on Thursday, one fewer than Wednesday, after discharging four and admitting three, spokeswoman Rebecca Sylvester said. University admitted 49 pandemic patients the previous week, its lowest weekly total in some time, CEO Jim Davis said.

AU Health System saw its COVID-19 patients dwindle to 24, one fewer than Wednesday, with 55 new positive tests to give it 25,239 since the pandemic began, spokeswoman Christen Engel said.

Doctors Hospital of Augusta had the biggest drop of four patients from the previous day to now 23 in the hospital and had one new case for 740 total, spokesman Kaden Jacobs said.

Aiken Regional Medical Centers saw 33 new cases since last week to reach 1,225 total, with 11 patients in the hospital, one more than previously, spokeswoman Ashlee Brewer said. The hospital has given 5,175 shots so far and has 1,698 people scheduled through the end of March, she said.

Charlie Norwood VA Medical Center in Augusta saw 15 new cases for 1,717 total, with 79 active cases among 77 veterans and two staff members, and remained at 82 deaths. The Augusta VA has vaccinated 8,528 veterans, with 5,341 receiving both doses.

South Carolina added 1,656 new cases to reach 440,517 with 42 new deaths for 7,502, the Department of Health and Environmental Control reported.