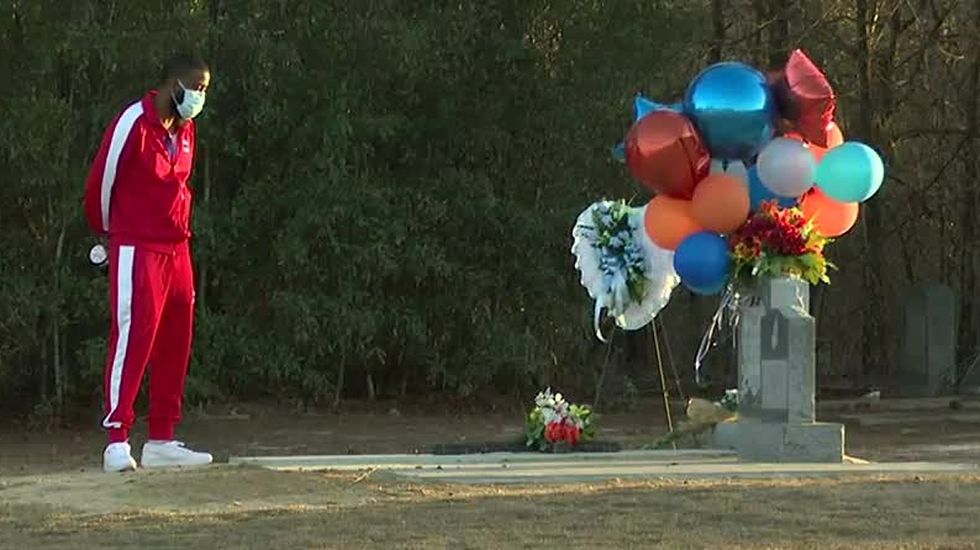 AUGUSTA, Ga. – She never imagined life without her son. But one year later, life without Ahmaud Arbery is the reality for his mother.

“A little, anxious, a little overwhelmed, and just still in disbelief,” said his mother, Wanda Cooper-Jones.

The community gathered to hold a candlelight vigil for Arbery on Tuesday night in Waynesboro, close to where he lies in rest.

Many sported blue ribbons, a gesture asked by the family since blue was Arbery’s favorite color.

“So, we stand with you, we pray for you and we will continue to cry loud,” a speaker at the vigil said.

Arbery was shot and killed while jogging through a neighborhood in Brunswick on Feb. 23, 2020.

Three men, Travis and Gregory McMichael and William “Roddie” Bryan were arrested and charged in connection with Arbery’s death. The three still sit in jail, waiting for trial.

She said the sharp pain of that day a year ago still has not dulled.

“Knowing that I had laid him to rest, and he had done not anything wrong but jog down the street … just go out there and honor him as Ahmaud, and as someone whose life was taken, so senselessly,” she said.

During the vigil, several speakers spoke of Ahmaud’s life and the tragic circumstances of his death.

“I would like justice for Ahmaud and not only Ahmaud, but all the other victims,” Cooper-Jones said.

His mother wants people to know Ahmaud was loved by many and he was more than just a jogger.

“Don’t let it die, people love to ride waves, don’t let this die,” a speaker at the vigil said.

As candles illuminate the spot where he now rests, his mother says she will not let the flame burn out on the fight for justice.

May Park warming center opens for homeless in Augusta