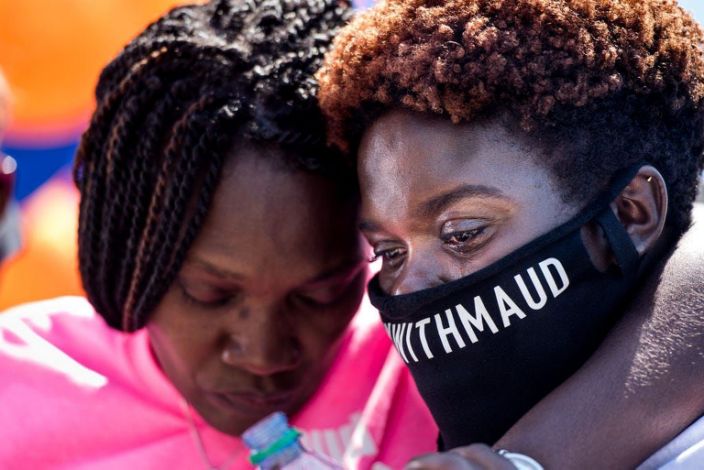 AUGUSTA, Ga. — On the anniversary of her son’s violent death, Wander Cooper-Jones filed a federal lawsuit Tuesday against the men charged with murder in Ahmaud Arbery’s death and the police and prosecutors she claims conspired to protect his killers.

The complaint filed in U.S. District Court seeks $1 million. Attorneys for the men charged with killing Arbery say they suspected he was a burglar and committed no crimes.

The civil lawsuit names as defendants the men who have pleaded not guilty to charges including murder in Glynn County: Travis McMichael, his father, Gregory McMichael, and William Bryan.

Arbery, 25, ran every day regardless of the weather, his mother told The Augusta Chronicle last year. He was living with her in Brunswick. On the afternoon of Feb. 23, 2020, Arbery’s ran into the Satilla Shores neighborhood where the McMichaels and Bryan lived.

According to the lawsuit, the three men armed themselves and chased after Arbery in their pickup trucks in response to reports of trespassing in their neighborhood and a “gut feeling” that Arbery was involved. Travis McMichael shot Arbery three times with a shotgun and as Arbery lay dying, cursed him, according to earlier reports and the lawsuit.

Arbery’s death was an execution, the lawsuit contends, but neither the McMichaels nor Bryan were charged that day as the police declined to investigate and Johnson later assisted with the coverup before recusing herself from the case.

Gregory McMichael worked in Johnson’s office for several years. He also worked alongside prosecutor Barnhill’s son, although Barnhill did not recuse himself from the case until confronted with the conflict. Before stepping aside, Barnhill wrote the police a memo saying he found no reason to charge either McMichael nor Bryan in Arbery’s death.

Arbery’s mother accuses Barnhill of libel in the lawsuit. All are accused of violation of Arbery’s civil rights.

According to the lawsuit, the conspiracy continued for several months and may not have ever been exposed if not for the release of a video in May that went viral. The video, recorded by Bryan, shows the final moments of Arbery’s life.

Travis and Gregory McMichael were arrested May 7, after a new prosecutor was assigned to the case and the government asked the Georgia Bureau of Investigation to take over the investigation. Bryan was arrested May 21.

Powell, the former police chief, was indicted on unrelated corruption charges. Johnson was voted out of the district attorney’s office.